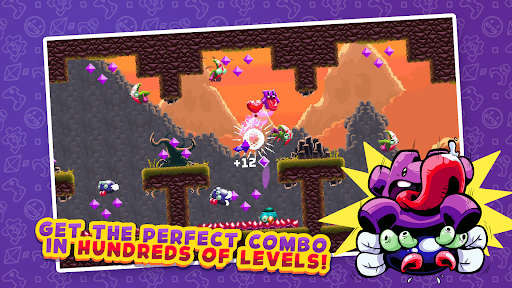 Travel through a giant interconnected world made up of hundreds of areas, each with multiple challenging enemies. Some will chase you, some will shoot you, some will fly around… And some are extremely dangerous! Can you be fast enough to defeat them all in a perfect combo?

Unlock different Mombo forms to reach speeds never before imagined! And use them to your advantage to uncover secrets and make powerful combos!

If you get tired of all the intensity, chill around and chat with the guardians of Subrosa. They will certainly offer items and upgrades so you can challenge yourself even more.

Don’t let Subrosa be destroyed by the fearsome King of Nightmares. Prove to be the long-awaited prophesied hero. Everyone counts on you and your giant tongue! Are you ready to venture out?